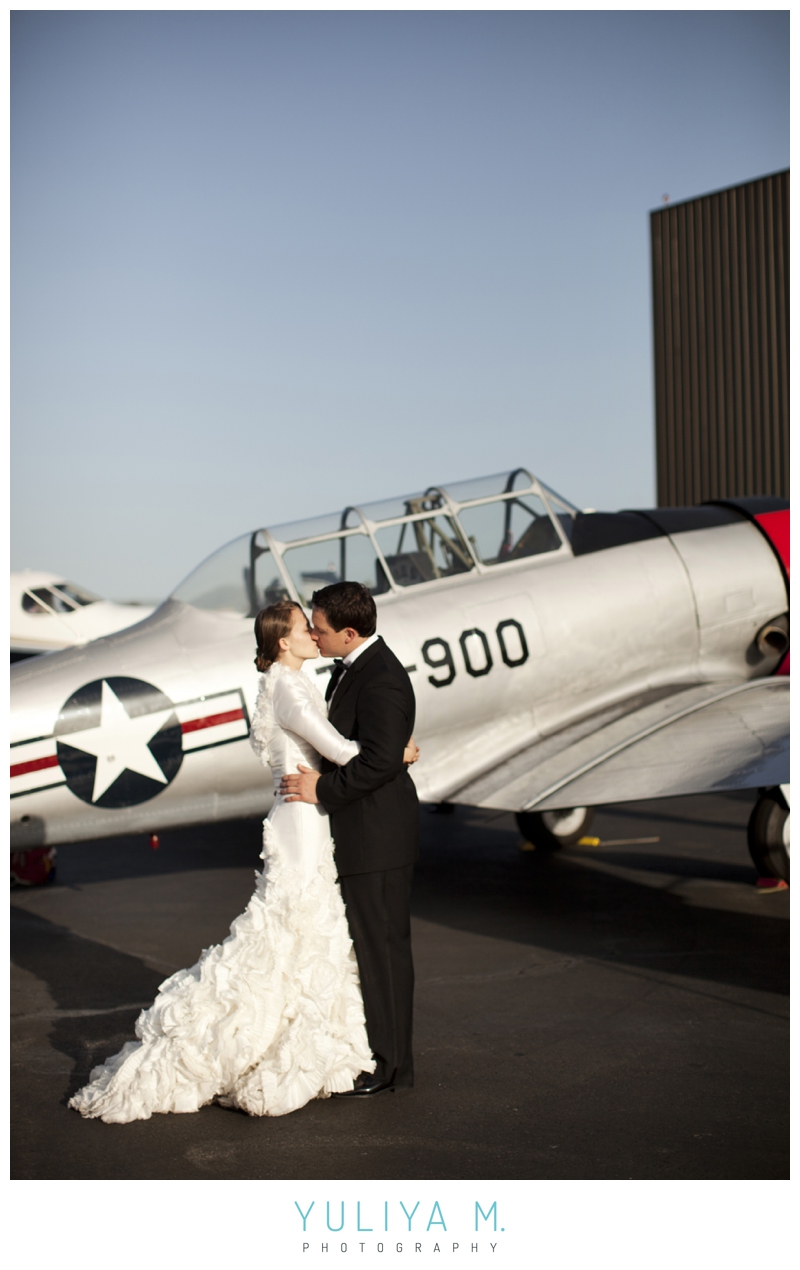 Who doesn’t love a well told story? Stories are my favorite part about this life! And some stories need to be told over and over again because they are simply beautiful. This winter one of my couples was featured in Real Weddings print issue and I just love how well they told Sophia and Bradley’s story. You can read it below and also be sure to check out the Real Weddings blog feature here. Thank you Wendy from Real Weddings for the feature and for telling the story perfectly! So grab a cup of coffee or chamomile tea (my latest crush) and read on!

“It was love at first flight for Sophia and Brad. The couple’s meet-cute is like one from a movie. They met on the tarmac at the KHWD Airport in Hayward. Sophia needed training for her pilot’s license, and Brad was her flight instructor. “Our relationship, at first, was quite professional,” the bride recalls. But as the lessons continued, their friendship grew stronger. “For many couples, date night is limited to a 30-mile radius,” she says. “But flying to Monterey, Harris Ranch and Napa were common occurrences for us.” It wasn’t long before Brad cemented his place in Sophia’s heart, after her mother’s death. “Brad was with me through the most trying time of my life. This drew us extremely close.” One month later, Sophia left for an extended trip to Europe, but the distance didn’t stand in their way. With constant communication, her cell phone bill totaled more than $1,500 by the time she returned.

Their relationship progressed, and soon Brad would propose. Sophia expected a typical dinner and a show date, but Brad expected to slip a ring on his girl’s finger—and that’s just what he did. They dined at Sophia’s favorite steakhouse in San Francisco, which was surprise enough; however, with Brad’s constant “checks on the car,” she started to get suspicious. After dinner, they returned to the car, only to drive around the block and park somewhere else. “I was quite confused as he insisted we take a walk around the block to let our food settle,” she says. “As we were walking, I couldn’t help but notice a long black limo parked on the side of the curb just a block ahead of us. The moment we were getting into the back of the limo and I saw the gorgeous pile of roses, I knew this was not an ordinary date night.” The limo drove them to an alcove by the beach, where Brad asked Sophia to be his wife. “I said, ‘yes!’ to the most perfect man in the world,” she recalls.

Sophia hadn’t thought much about her wedding until she was engaged. “I had never really fantasized about the perfect wedding,” she says. Fortunately, the planning was quite enjoyable and mostly stress free—“until the last few days, when I was a bridezilla!” she laughs. The ceremony was held at Valley Community Church, with the reception at Attitude Aviation. “It was classy comfort,” the bride explains of the wedding feel. “The food was delicious taqueria fare, which made for a lovely and comfortable contrast to the formal attire and spacious seating,” she shares. “And having the reception in the evening created a warm and intimate atmosphere in the aircraft garage hanger.”

Like any perfect night, there were many laughs—including the groom almost marrying Sophia’s sister! “The most memorable moment was when I’m nervously hanging onto my father’s arm, almost ready to walk down the aisle, and I hear the wedding march being played ahead of schedule! Apparently the band was signaled incorrectly and my sister was walking down the aisle to the wedding march. Now that was funny!” she says.

As for the rest of the night? According to the bride, “It was so perfect, it took my breath away.”

Here’s a picture of the lovely couple and you can see more of Sophia and Bradley’s Attitude Aviation wedding here. 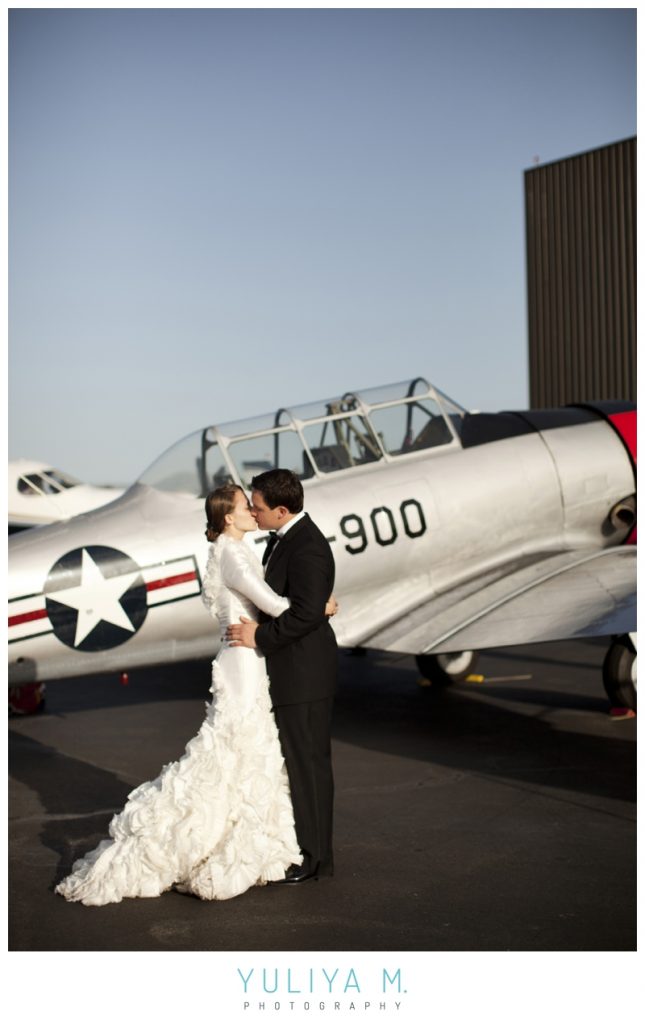 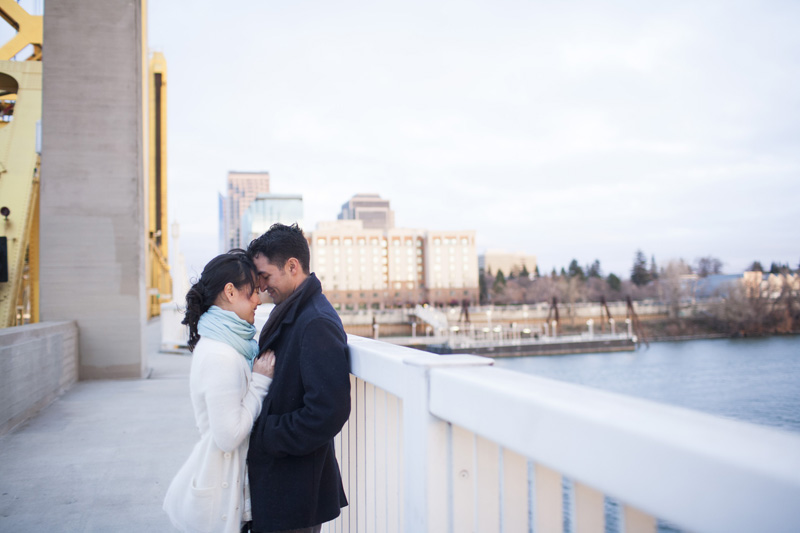 I love that wedding so much and am so happy for your feature. What an INCREDIBLE story! Love. Your images are simply perfect.